The Fierce Grace of Kali

A few weeks ago we talked about the goddess Durga and her epic battle with the evil brothers (for that story click here).  During that battle, Durga calls for help and it comes in many forms, the fiercest being Kali.  Kali manifests to defeat the demon-god Raktabija, whose drops of blood fall to the earth and instantly become new demon warriors.  Kali follows him around the battlefield drinking up the drops before they hit the ground, preventing new demons from forming.

The iconography and imagery of Kali is violent and scary: she is depicted as bloody, often blue or black in color, usually holding a severed head and bloody sword, with a garland of skulls around her neck.  It is intense to look at and can be hard to see beyond.  But as Tantrikas we look beyond the surface to see the shree (beauty, auspiciousness) even in what is not pretty:  “The skull in her hands, which her sword has just lopped off, is the ego that separates us from her. Kali’s nakedness shows that she has cast away illusion; in her, the entire truth about life and death is revealed. Even her color is esoteric; Kali’s dark colors stand for the ultimate void state, where all differences dissolve into the absolute beyond all form. Her sword is the force that slices through delusion, ignorance, false hope, and lies.” (Sally Kempton, Awakening Shakti) 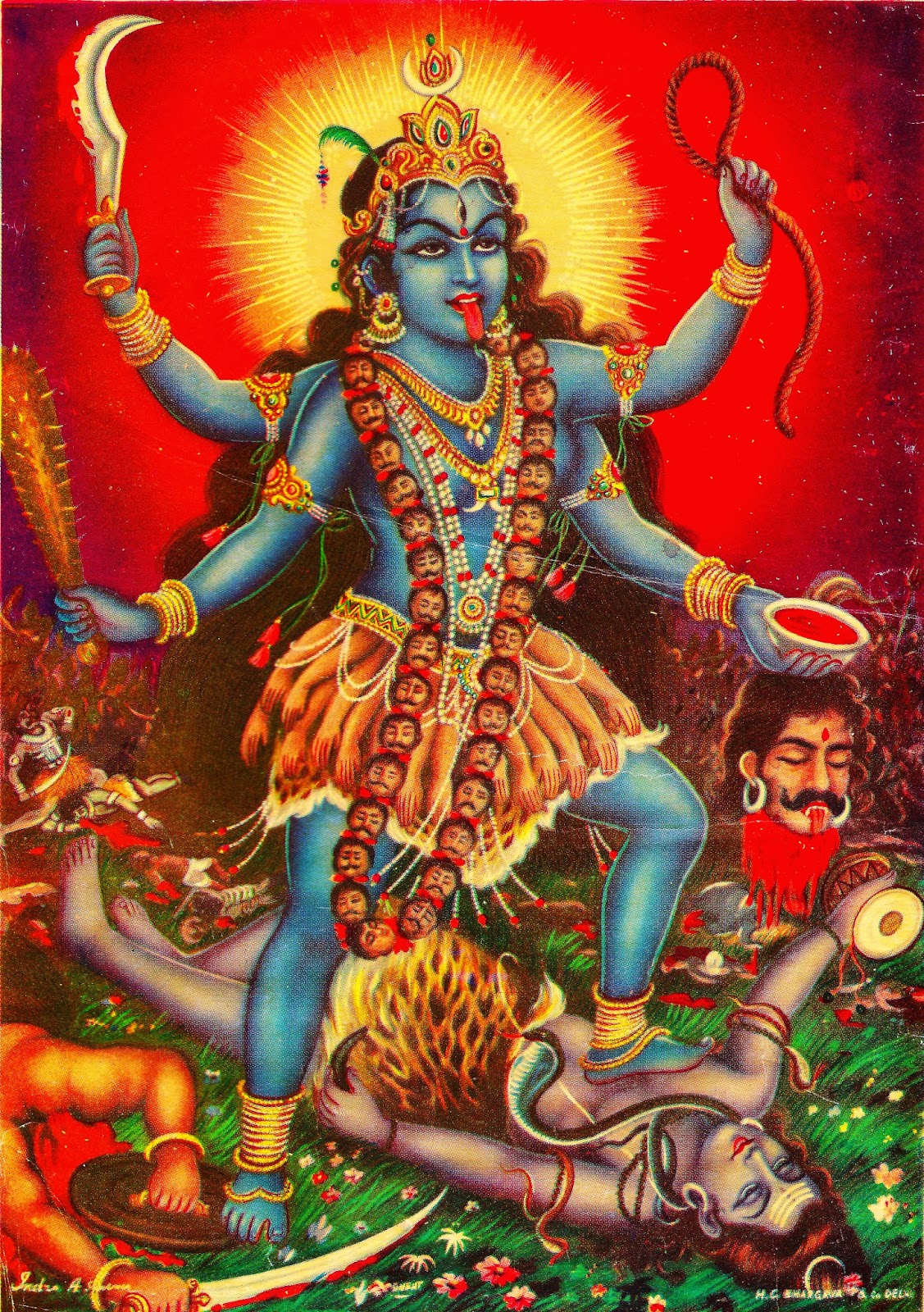 Kali opens us up to the side of ourselves that the "good girl" or "good boy" we show to the world wants to suppress.  She represents the raw, open (maybe even bloody), exposed parts of ourselves that we feel we have to hide to “fit in” with our culture, the parts of ourselves that are uncomfortable to reveal.  She represents the naked truth of who we are if we are willing to be really honest about it, the part that would hurt the most if, when revealed, it was rejected.  Perhaps this side of ourselves does need to be somewhat tempered, but it is a necessary part of life and one that I think most of us keep locked away in service of fitting inside the box society creates for “good” behavior.  Becoming comfortable with our Kali side means facing our shadow side, our built in contraction and narcissistic tendencies.  Even as I write this I am slightly cringing on the inside, but allowing her in means getting comfortable with your discomfort.  There is nothing subtle or soft about it – if you’re opening up to Kali energy, you open completely, you step into your life in all its beauty and terror and don’t look back.

And yet she is also the great protector.  During the battle she swallows up all the potential demons in order to protect the world, as fierce as a mother protecting her young. Sally Kempton says it like this: “Kali challenges us by daring us to look her in the face and find the love behind the pain of life. The way we see Kali at any given moment has everything to do with where we are in our own journey. Whether Kali seems terrifying, fascinating, or loving depends on our state of consciousness and our level of both emotional and spiritual development…. But she always invites us to a radical form of ego-transcendence.”   Kali invites you to be fierce in your life in all the ways it serves you and those around you, whether it’s in love or in battle.

Because Kali is a destructive force in the universe, she shows us what is truly indestructible.  The beauty is that in doing this she shows us exactly what cannot be destroyed.  She asks us: what are your non-negotiables? What are you willing to give up, sacrifice in service of living an authentic, meaningful life? What is most important?  Once we are clear on what that is, she inspires us to be ferocious in going after it, fierce in our love or passion or desire for the deepest connection we can make in this realm of existence.

In all my years of teaching yoga I have never taught Kali until this week.  It was too uncomfortable for me to embrace that side of myself so I avoided her altogether.  As is usually the case, we try to evade that which we need to face, and as I've been getting more acquainted with her through study and practice and contemplation I realized she is exactly who I need to invite into my life.  What she represents for me is looking at my life with stark, brutal honesty, and instead of cowering in the corner and hiding from the demons that threaten to eat me alive, running at them head down, horns out, saying I will literally swallow you up before you can get to me. It means allowing myself to be really vulnerable, baring my soul for all to see no matter how scary that feels, and speaking my truth no matter how unpopular or different that might be from the world I find myself living in.

As I've embraced and opened to my own Kali side this week, for only the second time in my life I lost my voice.  I’ve taught classes channeling the wild Kali-esque beauty of Stevie Nicks and Janis Joplin, and instead of feeling limited and restricted by my raspy, raw vocals I felt liberated by it - it was like Kali was speaking through me, that my altered voice was actually hers and I felt like a conduit for her fierce grace.   It gave me a confidence I didn’t know I had and in spite of being sick it’s been a glorious week. 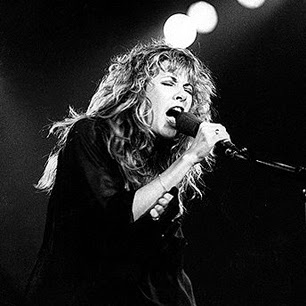 That grace and glory is waiting for you, it comes as soon as you open the door and allow Kali into your heart.

Off the Mat:
Short and simple guys – speak your truth.
A friend sent me this quote this week, by Rob Brezsney, the author of the book Pronoia:

I invite you to say this, or something like this: "I pledge to wake myself up, never hold back, have nothing to lose, go all the way, kiss the stormy sky, be the hero of my own story, ask for everything I need and give everything I have, take myself to the river when it's time to go to the river, and take myself to the mountaintop when it's time to go to the mountaintop."

On the Mat:
In my classes this week we worked on ferocious poses – like Uttkatasana (fierce pose), done with our tongues sticking out and a hissing or roaring exhale. It’s hard to be meek or timid with your tongue sticking out!   We  did a lot of core work, connecting us to our “non-negotiables”.

Getting fierce on the mat means making no excuses - we invoked our Kali-power to lap them up before they could get in the way of our practice, which brought us to a level of deep focus and intention.  We worked on Kali pose, which is a deep wide squat, reminiscent of the pose women used to birth babies in (and some still do).  The goddesses are all related to creation, and this pose reminds us that we need to be fierce in order to transform - like in childbirth, you have to surrender to what’s happening no matter how much it hurts, if you try to fight it you suffer.