Last week I visited Quinta da Regaleira in the beautiful town of Sintra outside of Lisbon, Portugal.  This UNESCO palace and extensive grounds was full of mystery, mysticism and intrigue.  What fascinated me most was the Initiation Well. It is a stone tower that descends through nine spirals 27 meters into the earth. 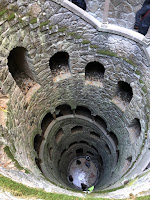 It is believed that various rituals and initiation rites took place here for practitioners of Tarot and Free Masonry or even the Knights Templar. The intention, we were told, was for the initiate to move from the known, the light of day, down through nine spirals into the depths of their own selves, darkness and the unknown. We entered through a stone portal and began our descent in silence circling deeper and deeper into the earth. The act of walking the narrowing spiraling inward well brought me into a contemplative quite place in myself.  We arrived at the bottom where the four cardinal points of the compass are inlaid on the floor and gazed up at the small circle of daylight. 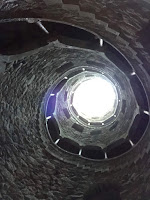 The way in is not the way out.  We headed into the subterranean tunnels.  First we arrived at another well, similar to the first but more crudely built.  You think you can ascend here but the path is blocked. It is a false exit, a trick.  Another tunnel led to a grotto- opening onto a waterfall spilling into a green pond, but this was also not an exit.  We then moved into an unlit tunnel, further into the unknown, true darkness and mystery.  This short tunnel led to the side of the pond and the true exit – a balancing act of crossing the green pond via 15 stepping stones. 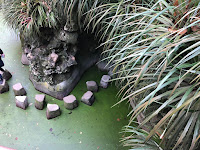 I made my way across with fingers touching the stone wall on my right only to have the wall end and still 4-5 stones to go.  Fear rose up.  Though I have fairly good balance, I felt trepidation at taking these last few steps with no support.

I found the whole experience a poignant metaphor for the spiritual journey.  We leave the known and venture into the depths of our own beings to encounter whatever is there; to know it, experience it and embrace it entirely.  There are often false exits and trick stairways until at last, overcoming our fear, we carry all we have understood and become back out into the light of day.  This is why we practice yoga: to know the depths of our own being and all that is in us so that we can live fully and completely; at one with ourselves.