The Wisdom of Durga: Asking for Help 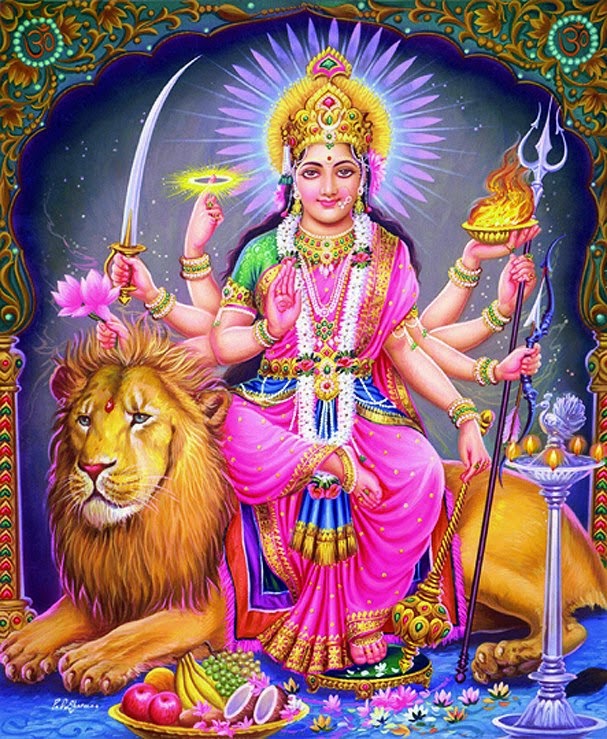 The myth of the goddess Durga begins with 2 brothers, Shumbha and Nishumbha.  These brothers want to maximize their spiritual power and to do so undertake a host of intense yogic austerities - standing on one leg in a ring of fire, holding their breath for 1000 years w/arms raised overhead, etc. When Brahma sees their intense practice of tapas (discipline, dedication), he rewards their efforts by granting them the boon they had been seeking: that no man or god can defeat them in battle.   (One of the lessons of this myth is that everyone is offered gifts - it is up to the receiver what they do with the gifts they are given.  Not the lesson I want to talk about today, but worth a mention. Back to the story....)

With their new found power the brothers (known as asuras or demon-gods) become invincible and set about wreaking havoc on the world – they amass enormous armies and conquer everything worth conquering, including land, prisoners, art and women.   When it gets too much to bear, the gods come together to discuss what to do and realize there is a loophole to this boon:  the one thing the brothers can be defeated by is a woman.  Unfortunately there were no female warriors on Earth.  The Great Goddess, up until this point, has been hidden, happy to channel her skills in the form of consorts to the male gods and has ruled from “behind the curtain”.  But the gods realize she alone can solve their problem, so they go to her and for 20,000 years entreaty her to come to earth and set things right.

This is the central teaching of the Durga myth - the Goddess is waiting to be asked.  Sally Kempton in Awakening Shakti says, "Because she is hidden, in order to act in the world the Goddess needs us to ask for help."  To access her transformative power we need to call it out, ask for it, pray for it.  "The power is there, but we have to summon the courage or desperation to ask for it, and it is only in doing so that we bring it forth."

So the Great Goddess descends to Earth in the form of Durga, riding on a lion and bearing an impressive array of weaponry.   In the midst of the epic battle that ensues many other goddesses are born from Durga’s body to fight the onslaught of the huge army the brothers had amassed: first Kali emerges from her 3rd eye (ajna chakra), then Indrani, Saraswati, Vaisnavi, Chinnamasta, and Bhairavi all emanate forth.  The goddesses of course defeat the brothers and their armies, and as Durga lays the killing blow, the asuras realize who she is, and smile with the ecstasy of the goddess filling their being as they dissolve back into her body.

This battle represents the inner battle that happens in us when we undertake any transformative spiritual practice.   For most of us, it is harder to ask for help or to say we don’t understand or we don’t know how to move forward, than to just keep doing what we’re doing and on the surface muddle through.  Yet when we do this, no shift or change in the underlying pattern occurs and so it repeats itself and we stay stuck where we are. It’s like that old saying “If you always do what you’ve always done, you’ll always get what you’ve always gotten.”  The times in my life when I have been strong and courageous enough to admit what I couldn’t handle, given voice to my stuck-ness, and either asked for exactly what I needed or admitted I didn’t even know what to ask for are the times when I have had huge breakthroughs, when my life has changed direction and charted a new course.  Even the Great Goddess couldn't do it alone, so why do we think we have to?  I was just reading an article about some of the most successful CEOs in the world, and one of the traits they universally share is the ability to choose a good team and to delegate.  They know who and how to ask for help and this is not a weakness but a testament to their wisdom and strength.

In Awakening Shakti we learn that “The grace of the goddess is a 2 way stream.  There’s the movement from the subtle - the movement of grace descending into the human world.  But it can’t land unless there is a calling from below.  It can take different forms – mantra repetition, meditation, prayer – but the calling has to be there."  Help is often hidden and yet always there.  The great work of yoga is to soften out of your own self-consciousness and self-effort and open to help from beyond.

Off the Mat:
Where are the places in your life where you feel stuck, in a rut, stagnant?  Durga summons the other goddesses into the world to help her fight the battle of her life – who do you need to summon?  What do you need to ask for to get you where you need to go?  If you don’t know, just giving voice to the not-knowing often leads to the answer.

On the Mat:
In my classes this week we are working on backbends. Asking for help requires a certain degree of humility, of finding the balance of self-love (individual) and Self-love (universal).   In the body this can be felt through the actions moving the shoulders back to open up the upper back which is chronically stiff from both biomechanics and held stress, while simultaneously resisting the low ribs and belly back which for most of us is much more mobile and flexible.  Drawing the belly back mimics a posture of humility, helping us to more easily admit to what we need.  And once we are ok with that, then the work of opening up the heart happens, moving the back bend to the subtle upper back, which is so hard but so radically transformative.

For the Anusara Junkies:
Open To Grace:
Use your breath to create a fullness of the inner body and open the back body, softening out of any tough guy persona, and examine what needs to be asked for.
Open to the possibility that you don’t have to do it all alone, that you can ask for what you need to get you there and invite it in with the breath

Muscular Energy:
With the ferocity of Durga firm your leg muscles.
With the fierce desire to transform yourself, fire up every muscle.

Organic Energy:
Let the brilliant light of the Goddess come to you and enliven and brighten your inner fire.
Let the fiery shakti of Durga radiate through you and take the form of your pose.
Posted by Rachel Dewan at 6:33 PM