Chaya and I spent much of last week at Samudra Shakti, the first gathering of licensed Anusara teachers in the USA since 2012. There were more than 75 licensed teachers in attendance, from all over the country and a few from Mexico. There were teachers, like Chaya, who have been with the method its beginning, and there were teachers who just became licensed in the last year or 2, and everything in between.  The gathering had the flavor of the true meaning of the word Samudra, which has its roots in the Rgveda, and means “gathering together of waters (oceans)”, or “convergence”, or “a body of water that rivers flow into”.
Although I tried not to, I went in with lots of expectations, but my aha moment was the simple realization that we can choose to be awakened anytime we attune to the present moment and allow ourselves to fully immerse in it. The philosophy that gives life to Anusara Yoga has been around for 3000 years and is still around because it is beautiful, life-affirming, and helps to create meaning and purpose in a world that becomes more complicated by the day. Much of the retreat for me was just a reminder of that core teaching; that the individual, the universe, and the Absolute are one single continuous reality whose nature is consciousness and bliss. When we open to that reality, we step into the ever-flowing river of our lives with awareness and openness and say yes to every emotion and experience, knowing that any of them can have the capacity for a revelation. When I let go of expectations and just listened, there was so much wisdom to be absorbed.
Anusara has come far from its guru-centric tendencies and has stepped fully and gloriously into its new manifestation as a teacher-led school. 35 teachers, including Chaya, presented classes, workshops, meditations, chants, Q and A sessions, and Open Space forums where ideas could be shared. Each teacher’s voice was powerful and skillful. We talked, we meditated, we sang, we chanted, we hiked, we made s’mores, and we “did yoga” in every sense of the word. Everyone who wanted to have a voice had one, which created a collective, diverse, and yet unified bigger voice. Anusara Yoga has become the sum of its parts and greater, with over 1000 licensed teachers worldwide and growing every day, including 3 teachers who were given their full Certification at the retreat, one of whom was our beloved Adolfo.
Madhuri Martin, one of the event coordinators created this beautiful intention for our gathering and the future of our school: “We are only as awakened as the company we keep. Shiva as a singular totality is entirely concealed in the diversity and plurality of being. As we make the paradigm-shift to an entirely teacher-run and teacher-held global yoga community, we recognize that we are only as realized as we are a connected collective. Samudra Shakti acknowledges that the seat of the teacher must move around the room, must continually shift, to those who take up their own gifts, who show cultivation and whose self-empowerment invites the seat of the community.”
I am so proud to be a member of this organization, and so grateful to those who have kept it going since 2012. I am grateful for the method’s powerful teachings, once-again-strong community, and capacity to transform lives, including my own. I am grateful to all the teachers that made beautiful offerings at our gathering. I am grateful to those, including Chaya and I, working to make Anusara more inclusive and more available to everyone. I am grateful to Chaya for encouraging me to attend and be part of it. And I am most grateful for the affirmation I received by just being there and being a heard voice in the collective. 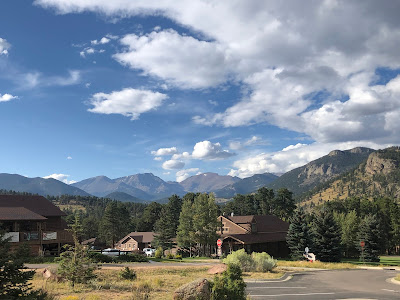 Estes Park is a bowl-shaped valley surrounded entirely by the Rocky Mountains. It felt to me like many rivers from all over the USA flowed into the chalice of that bowl for 4 days last week and converged in a beautiful ocean of learning, questioning, conversation, and shared love, all while holding ourselves and each other to our highest in speech, practice, and interaction. I am reminded of the words of Rumi:
“You and I have spoken all these words, but for the way we have to go, words are no preparation. I have one small drop of knowing in my soul.
Let it dissolve in your ocean.
A mountain keeps an echo deep inside. That's how I hold your voice.”
To my fellow Anusara teachers and students, thank you for the drops of knowing. I hold all your voices still echoing in my heart.