Our story of the week at Shree has many different variations, but this one is my favorite.  As we spoke about last week, Parvati’s question of Shiva is to learn the secrets of yoga, the doorways to the Infinite, the pathways to liberation.  Shiva, adoring her so and wanting to make her happy, finally gives in to her constant requests and endeavors to share all he knows.  They come together to sit on a sacred beach and Shiva begins his discourse into the practices of yoga.  Unbeknownst to them, a giant fish swims nearby and realizes that something remarkable is happening, so he sticks around to listen in. 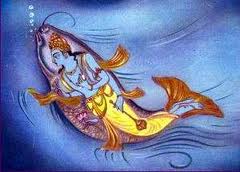 This is no ordinary fish – years before he had rescued an infant boy who had fallen into the ocean, and the boy was still growing in his belly as he comes upon Shiva and Parvati.  The boy also overhears all Shiva has to say and becomes entranced by the teachings of yoga.  He spends the next 12 years inside the fish exploring the practices described and demonstrated by Shiva on the beach.  When the fish expires, the boy emerges, fully enlightened, as the sage Matsyendranath. He then spends the rest of his days passing down these teachings through his students and disciples, including Gorakshnath (one of the Nath Yogis, widely accepted as the father of Hatha Yoga), and as such he is regarded as the human originator of yoga.  This is a pivotal moment in yoga tradition because it begins the tradition of passing down knowledge from teacher to student that has been one of the hallmarks of Hatha Yoga for thousands of years, and one that we still continue today as we study and practice yoga with our own teachers.

(Side note, from Yoga Journal: "Matsyendranath appears to have been an actual historical person, not just a figure of myth. Born in Bengal around the 10th century c.e., he is venerated by Buddhists in Nepal as an incarnation of the bodhisattva of compassion, Avalokiteshvara. As with most Indian myths, there are many versions of the story of Matsyendra's metamorphosis into a realized adept—and all of them illustrate the radical transformation that yoga makes possible.” So the fish part of the story is probably myth, but the man was real.

I have my own story of eavesdropping to share, a 20th century version.  Last week, while running some errands I was using the voice translate feature of my phone as I was driving to make some notes for myself. As I was doing this, I was navigating a busy parking lot and finally found a shopper leaving a store that I could follow to her spot.  As she pulled out of her spot, someone coming from the opposite direction cut me off and "stole" my parking spot.  Being alone in the car, I had a few choice words to say about this turn of events as I continued on my way and found another spot.  I grabbed my phone to shove in my bag, and when I picked it up the note I had been transcribing was on the screen. It read something like: 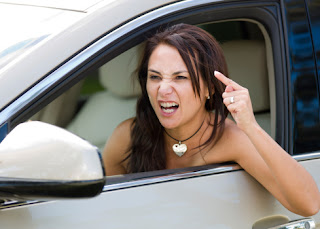 Pick up Kiran's necklace, get end of year gifts for Rakhi's teachers, finish writing blog YOU STUPID JERK, DIDN'T YOU SEE ME? WHAT'S WRONG WITH YOU??  I’VE BEEN DRIVING AROUND FOR 10 MINUTES, OH, AND NOW YOU'RE LOOKING AT ME LIKE I SHOULDN'T BE HONKING AT YOU WHAT IS WRONG WITH PEOPLE….” and so on.
It was basically the ravings of a lunatic.  Not one of my shining moments.

So the point of both of these stories: You never know who might be listening.  Whether it’s your children, your phone, or just the Universe, every being around you absorbs your energy so it is up to us how we want to share.  As I write this I am sitting on my back patio, listening to my neighbor yell at her husband for the last 15 minutes. And even as I cringe I recognize things I have said before in heated moments.  As we talked about last week, conversation, dialogue is so important.  In my more mindful moments I am much more aware of what comes out of my mouth, so I know that thoughtful person is in there somewhere.

My most beloved and influential teachers are the ones who, just as Shiva did for Parvati, demonstrated and modeled simply through the act of living their lives how to be a yogi.  But as we often speak about, and evoke in our invocation each time we practice, the real guru is inside our own hearts – a good teacher can just awaken that awareness and help draw it out.  Each time we come to the mat we touch on the guru inside, our higher Self, and in making that connection can bring forth more love, light, generosity, compassion, and gratitude to the world around us.  What is your heart teaching today through your words and actions? Is the message clear and authentic and uplifting?  We all have the capacity to radically transform our own lives and the lives that we touch.  It’s up to us what we wish to offer to the world.

Off the Mat:
Leave the voice recorder on your phone on for a while and go about your business.  Listen back later and hear if your words and actions are in alignment with your highest intentions.

On the Mat:
In honor of Matsyendranath, in my classes this week we practiced Matsyasana (Fish Pose) and Ardha Matsyendrasana (Half Lord of the Fishes Pose), both named for him.  We also worked on hip openers, with careful alignment of the feet to ensure safety for the knees and hips.  We let the feet be the teachers, sending clear teachings of alignment and intentions for deep opening to the student in the hip.

For the Anusara Junkies:
Open to Grace: Breathe in and feel the person you aspire to become already inside you, filling you up and lighting you up on the inside.
Align (your foundation) to demonstrate your highest intention to offer beauty, love and light to the world.

Muscular Energy: Firm your muscles and firm your resolve to send love, light, beauty to the world.
Engage muscles to engage with the voice you wish to share with the world.
Pull to midline to connect to your authentic heart.

Ankle alignment: Let the ankle/foot speak with clarity and truth to the hip (by pulling back pinky toe side of foot, lifting toes and inner ankles, pressing into ball mound of big toe, un-sickling the foot)
Level the ankle bones and let the ankle enlighten the hip.