Astavakra was aware that he was a philosopher and a scholar from almost the moment of his conception.  When his mother was pregnant with him, he would listen to his father chant the Vedas, and he noticed that his father often misquoted the sacred text.  One day he could stand it no longer and from his mother's womb he called out to his father correcting a mistake.  His father became enraged and cursed him in the womb, causing his body to bend in 8 places, and Astavakra is hence born with a disfigured body (asta­ means “eight”, vakra means “bent” in Sanskrit).  When he was grown, still considering himself a scholar, he decided to go to the court of King Janaka to learn from the famed Vedic scholars who were rumored to study in his assembly.  Because of his disability it took him many days walking with a cane to get there.  When he arrived, he was greeted with laughter at his deformed body. At some point the King observes that the sage appeared to be laughing harder than anyone else – he approaches Astavakra to ask why and realizes that he is actually crying not laughing.  The king asks why he is crying and he replies that he is utterly disappointed.  He tells the King "I came in search of scholars and philosophers of great wisdom and found only shoemakers."  Janaka, offended, asks "Why do you think there are only shoemakers?"  Astavakra replies “because these men only see skin, not the atma (soul).  They only see the surface and base their evaluations only on the outer appearance. Coming here has been a waste of time.”  Recognizing the truth of his sentiments, King Janaka bowed down to Astavakra and became his loyal student in the science of the soul for many years following. 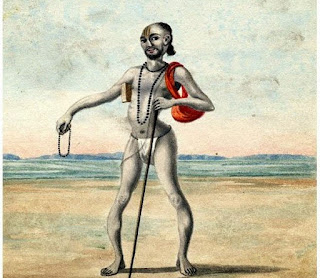 This story begs the question of each of us as to how much we identify with the outer form of our bodies.  The body is the temple of the soul and should be respected and treated with reverence and care, yet we are so much more than just our physical appearance.  Yoga is a tricky spiritual practice – the reason it is so transformative and powerful is that it incorporates the physical with the deeper levels of who we are as humans – the mental, emotional and spiritual aspects that make up the soul.  Yet because there is a physical practice involved we can get caught up in just the flesh and forget the spiritual piece that is the true goal of the practice – to unite us with our transcendental soul and the source of all creation. The upsurge in "yoga porn" on social media has in some ways exacerbated this problem.  It's so hard to draw the line of where inspiration crosses over to gratuitous self-indulgence or self-promotion.  The line of where sharing a pose or a practice you love with those around you simply because you love it (there is value in that - much like a musician performs a song) shifts from spiritual practice to bowing down to the goddess of youth, beauty and flexibility.  I have struggled with this question for years - I don't know exactly where that line is.  I try to only post photos that exemplify a teaching I want to share.  But if I'm being totally honest, some of those posts are entirely dependent on how I feel about the way I look in a pose and what the scale read that week.  Sigh.

What this story really says to me is that each time we put a label on someone or something we limit it and our own understanding of the true nature of whatever it might be. We fail to see the soul, the spirit, and the unique light of an individual. My 8-year-old son was diagnosed this year with ADHD and although it was not at all news to me, I still cringed that he would be put in the box that a diagnosis can build around and inside a person.  To my amazement, the opposite happened - instead of it limiting him, it opened countless doors and he has flourished under the guidance and care of amazing teachers.  (For more of Kiran's story, see this video.)  I am choosing to see his “diagnosis” as just another way of understanding my child, to meet him where he is and move him forward with the hand he has been dealt.  There is nothing “positive” or “negative” in it, it just is.  I think if we can see all our attributes this way, not allow them to box us in but rather to open new pathways of learning and experience, we break through that skin barrier and move closer to the ever-present light of being within ourselves.

When Astavakra walked into that room, the scholars immediately put him in the “disabled” box – it is simply human nature to label and categorize because on some level it makes life easier, helps us deal with our own insecurities and discomfort around what is different than we are. We all do it. And it is possible, like my son's teachers did this year, to choose to use that label to help see deeper to the true nature of a person. In the non-dual tradition, we understand that all life flows from the same source, whether we view it on the outside as “beautiful” or “ugly” or “misshapen” or “broken” or any other label we can put on it.
Yoga practice is ultimately the practice of uncovering our true nature, hidden beneath the surface of our flesh and skin and bone.  What we do with our bodies does influence the inner experience and can be part of the bigger whole of who and what we are, but it’s not the whole picture.  What we do on the mat should be in service of a deeper connection to our Source .  When we make that connection within ourselves, we see beyond the costume of the skin to the true essence of each and every being.  How we see and experience the world is always a matter of perspective.  I like to think of it as a beautiful tapestry – looked at from the back it’s a muddled mess of strings, from the front a stunning picture. It’s the same tapestry, but which side are you looking at?

Off the Mat:
From your barista at Starbucks to your babysitter, your spouse, your child, your mailman, your tollbooth operator, try to see the beautiful picture rather than the mess of strings first, regardless of even how someone might be behaving.  Recognize the divine light present in every being you come in contact with, see beyond outer appearance, behavior, attitude to the inner soul.  In every interaction remember that we all flow from the same source.

On the Mat:
Practice with eyes closed as much as possible.  Have the inner experience of the pose more than the outer.  Let the poses evolve from the inside out.
In my advanced classes we worked of course towards astavakrasana, a tricky arm balancing pose in honor of Astavakra and his 8 bent places. In beginner classes we worked towards astangpranam or knees-chest-chin pose. To prep for the arm balance, work on opening the hamstrings, upper body strength as in caturanga dandasana, and some core cultivation to help lift you up.  Above all, don’t judge the pose by what it looks like!  If it doesn’t seem possible to you right now, work all the prep poses and (if you want to) eventually you will get there.  Take yourself out of the “I’m too old, weak, big, small, inexperienced, scared, (fill in the blank)…” box and see what opens up for you.

For the Anusara junkies:
Open to Grace: Soften to the broken places inside yourself, the places that feel bent or even disabled.
Inhale and feel the inner body, the soul, fill the outer form of your body.
Claw your fingers to the mat, grounding in all your bent and twisted places.

Muscular Energy/Shins In: Embrace your bent and broken places.
Hug from the outer skin to the inner soul.
Feel the muscles tone beneath the skin, connecting to a deeper layer of your bein.
(In prep for astavakrasana) Hug knee to shoulder embracing all your twisted, kinked parts.
Hug elbows to midline (in caturanga & arm balances) celebrating the bent places that move you deeper into your pose and yourself.

Shoulder Loop: Move the HABB and open your heart to your crooked places.