There are no coincidences

Although there seems to be a randomness to the world, unexplained occurrences that can leave us breathless either from joy or heartache, I don’t believe in coincidence. All that I have read and studied and practiced in my own life coupled with my life experience have taught me that  even though some things seem arbitrary to my limited human brain, there is a bigger picture of the universe that I am not privy to that lines things up in seemingly coincidental ways.  Like those 3D posters that were popular in the 90’s where you had to blur your eyes to see the hidden picture – the pattern seemed random, but when you focus the right way the picture would reveal itself.

Grace (or God or the Universe or whatever you want to call that which is bigger than yourself), is in a constant state of contraction and expansion and we are part of that.  We can participate with it and in doing so align ourselves with her shakti and flow so things tend to move generally in the direction we want them to go in, but as we are in relationship with her, and with so many other beings, all of whom have their own karmic imprints and cycles that they are a part of means that sometimes they line up and sometimes they really don’t. These can come in the form of “aha” moments: expansive epiphanies, beautiful happenstances, mind-blowing realizations, as well as mere “coincidences”….but can also come in the form of unexplainable devastation, heartbreaking loss, and debilitating illness. But when we are in the flow of Grace we realize that all of those are part of the same cycle.  We take responsibility for the choices we made along the way, but realize that for better or for worse we are not all-powerful or omniscient, and the way things go are not ultimately up to us alone.
More than anything else, my training with Todd Norian was a huge lesson in spotting moments of grace in all experiences, and after years of practice these moments happen to me constantly – usually several times a day.  I don’t think they happen any more often now, I just think I’m tuned in better.  Most of these are small daily sweet little alignments, but one of my biggest “aha” moments was in Chicago in 2010.  I was at a crossroads in my teaching – I had been contemplating pursuing full Anusara Certification, had been studying a lot of Anusara and wanted to move forward.  At the same time, I became very involved in our synagogue as a result of my rabbi really taking me under her wing and reawakening my interest in Judaism.  I had started teaching a “Jewish” yoga class which was very well received but was very torn about the ways it drew me away from my Anusara studies and work.  In the midst of this my Rabbi called me into her office and told me she wanted to pay for me to go take a training in Yoga and Jewish spirituality.  It was quite costly but she was going to pay for the entire thing.  I walked out in a sort of daze…it was totally unexpected and I had to give her an answer within a few days as the program started soon and I had to arrange childcare, etc. for the 18 months I would be enrolled. 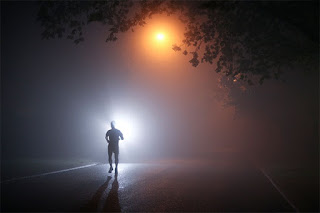 The next morning I went for an early run, which is when I do my best thinking.  It was dark out and I was very much absorbed in my own thoughts about this process.  We had moved to Chicago for my husband’s work, yet my career was exploding.  I was getting numerous opportunities to expand professionally and I was reflecting that perhaps it was my shakti that brought us to IL not my husband’s, even though I went there kicking and screaming.  I was reflecting on the decision I had to make that would clearly shift my path away from the path I thought I wanted to be on.  I was feeling like someone was offering me a beautiful gift and when you are offered a gift you can’t say no…but it was so not in the plan.  The thought in my mind was “maybe the universe is sending me a sign that this is really my path I just hadn’t been aware of it until now”.  As that thought came into my mind I rounded a corner and in the dark, saw 2 figures standing on the corner directly in front of me...it was my rabbi and her husband.  I was so shocked I almost fell over, I actually stumbled…wished them a good morning and ran off in utter shock.  Now, admittedly, she lived a few streets over from me in my neighborhood.  But in all my years there (almost 4) and my 5-day-a-week runs at approximately the same time, this was the one and only time I ever saw her.  I did enroll in the training and it did change and expand my life in amazing ways and I know it was the right choice.

In The Alchemist, (Shree book club's pick of the month - join us March 12th to go deeper!!) Paulo Coelho tells us "When you want something, all the universe conspires in helping you to achieve it." When we align with our choices fully wholeheartedly Grace feels that alignment and answers in kind.  When we come onto the mat, move with our breath, align our bodies with our hearts, our energy with those in the room, and in doing so with the whole yoga community who aligns with these teachings, amazing shifts can happen.  When we are open to the push and pull, give and take, expansion and contraction of the universe we see beauty and meaning in every experience, however random or coincidental they may seem. Sometimes the most random acts turn out to be the most pivotal - and it's not that they are happening more often now. When I am sensitive, attuned, aware I simply notice them more.

Off the Mat: Take time this week to notice "moments of grace" - seemingly coincidental events that pop up without rhyme or reason.  Look for them, be open to them, seek them out, and revel in the joy of connection.

On the mat: In my classes this week we worked on the complementary expansive and contractive energies of shins in - thighs out to build to poses (depending on level) such as Eka pada rajakapotasana (pigeon lunge), agnistambasana (fire log pose), padmasana (lotus pose), eka hasta bhujasana and eka pada koundinyasana 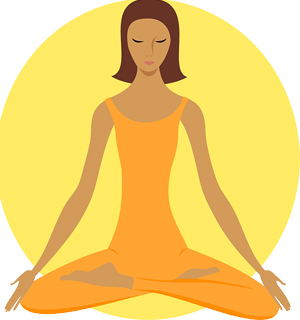 For the Anusara Junkies:
Heart quality – stepping into the flow, being with what is, being open to the seeming randomness, aligning with coincidence

Open to Grace: open to the myriad of possibilities any moment offers you

Muscular Energy/Shins In: Hug shins to midline to engage with the current moment
Engage with the flux and flow of the Universe as it pulses in contraction and expansion (SI/TO)

Inner Spiral/Thighs Apart: widen sit bones and open to the uncertainty of life
Widen inner thighs and make space for the seeming arbitrariness of human existence

Outer Spiral: Sink tailbone and tone belly, affirming your place in the bigger picture that we are not completely aware of and yet an integral part of

Organic Energy: Celebrate the freedom that allows us to choose how we see every experience that presents itself.