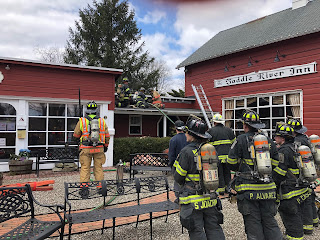 At 8:30 this Sunday morning, April 8, we began our regular offering of yoga classes. We enjoyed a lovely flow class with Valerie. The 10:00 am Beginner class, ever popular, went off without a hitch. However, in the middle of Elizabeth's Restorative Yoga and Meditation class at 11:30, a gust of brown acrid smoke belched into the studio around the beam that connects into the bathroom area, filling the studio. The class disbanded, our students being as always, so gracious and helpful exemplifying the sense of community that is found at Shree. Elizabeth called me and she moved all the props away from the wall to protect them. She opened and aired the smoke out of the studio. Fire department and police were called. The men doing the renovations had been using a welding torch and the area around had caught fire. Though a fire extinguisher was used to put out the immediate flames, the two fire departments that arrived on the scene found more smoldering burning insulation with a heat sensor. Bathroom walls were ripped out and water was hosed into the area. We stood outside praying that the water wouldn't penetrate into the studio. A miracle. It didn't. 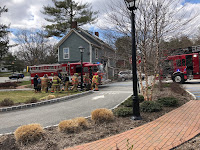 The studio is bone dry, fully aired out, smells fresh as a daisy and all classes are taking place as scheduled.  We are open.  We haven't missed a beat.

I feel such a sense of gratitude. We could have been burned to the ground - those old wood buildings that give Shree its unique airy and welcoming feel, can catch quickly. A big thank you to Elizabeth for handling the situation until I arrived, and staying with me throughout. And, to my husband William, right there by my side.

The biggest gratitude goes to the Saddle River Police and the many volunteer fire fighters of Saddle River and Wyckoff, the Fire Chiefs and Fire Marshall Rich, and others I wasn't even aware of, who came out on a Sunday afternoon - ready to battle the flames and restore order. Selfless Service or Seva is one of the great yogic components. We do yoga inside the studio, they do yoga outside the studio with their actions and generosity of time, skill, courage and caring. One kind volunteer fireman kept checking the studio to see if water was coming in and giving me the thumbs up. So thoughtful and kind. Blessings abound.

I am reminded of an oft touted saying, "life can change in an instant".  While this was a scare that could of ended in disaster for our beautiful studio and the important part it plays in many of our student's lives, not just as a physical practice, but as a provider of emotional and spiritual support, we were spared.  Carpe Diem.  Seize the day. Practice now while you can.  Live fully.  Life can, and does, change in an instant. 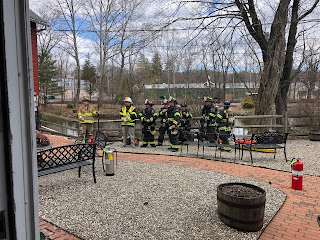 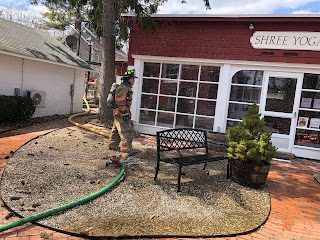