Chapel of the Bones

During my travels earlier in the month, we had an interesting and rather unexpected church visit in the Portuguese city of Evora. We encountered the transience of life up close and personal. “The Chapel of the Bones was built in the 17th century, with the intention of provoking by the image the reflection on the transience of human life. Both the walls and the pillars are covered with a few thousand bones and skulls from the burial spaces connected to the convent.” By the 16th century, there were as many as 43 cemeteries in and around Évora that were taking up valuable land. Not wanting to condemn the souls of the people buried there, the monks decided to build the Chapel and relocate the bones. 5000 corpses were moved. The inscription over the door reads: “Nós ossos que aqui estamos, pelos vossos esperamos,” or: “We bones, are here, waiting for yours.” 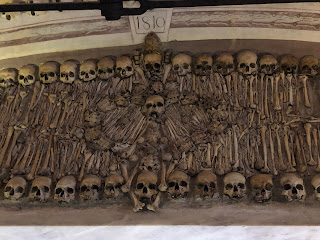 It was both beautiful and somehow terrible to behold so many bones artfully decorating every vertical surface.  There was a pillar of sacrums, stacks of femurs, masses of skulls and arches of tibias.  The monks would meditate here on the ephemeral-ness of the body and life finding inspiration to commit fully to their religious practices.  I wished there was somewhere to sit and contemplate because it certainly did stimulate this awareness in me. It also brought home the unity of all bodies and all peoples regardless of color, creed, religion or ethnicity – all the things that seem to divide us and make us feel better than, less than, and certainly different from one another.  Tantric philosophy teaches that we are all made of the One energy and nowhere was this more apparent to me than in the Chapel of Bones.  The Bone Chapel brings perspective, one of the 8 Pillars of Joy. 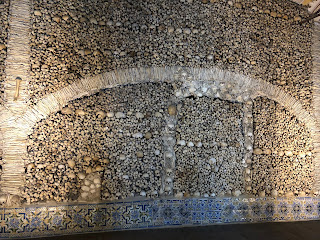 Here is a poem by Father Antonio da Ascencao, that hangs from one of the pillars:

Where are you going in such a hurry traveler?
Pause… do not advance your travel;
You have no greater concern
Than this one: that on which you focus your sight.

Recall how many have passed from this world,
Reflect on your similar end,
There is good reason to reflect If only all did the same.
Ponder, you so influenced by fate,
Among all the many concerns of the world,

So little do you reflect on death;
If by chance you glance at this place,
Stop… for the sake of your journey,
The more you pause, the further on your journey you will be. 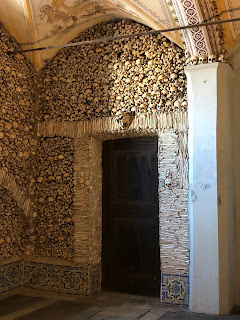