The Power of Practice 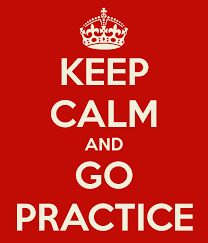 We've been watching a lot of America's Got Talent in my house, and although much of it makes me somewhat nauseous (there was a professional regurgitator on the last episode - I didn’t even know that is officially something you can be since spell check can't even seem to figure it out…), the level of dedication it takes to achieve success in your chosen talent is inspiring to watch.  As we watched last weekend, my 2 older children commented on what they were seeing - my 12-year-old saying things like "His parent must be a musician/diver/dancer", or "That level of talent is so rare".  My 9-year-old says things like "How much do you think they had to practice?" And (for the younger talent) "Do you think they have time to go to regular school too?"

This is so who they are - the older off the charts book smart, has a nearly eidetic memory, and doesn't have to work very hard to do really well in school.  The younger is emotionally intelligent, wildly creative and artistic, and has spent his life constantly trying to "live up" to his older brother.   I'll give you one guess which one is the harder worker.  And as much as this dynamic makes me cringe sometimes as a parent, I also recognize that in terms of qualities that will ensure success, the one who knows how to work really hard to get what he wants (even if it happens to be approval) will always come out ahead.  He knows how hard he has to work to be a rainmaker.

In researching the traits most conducive to success in a given field I found numerous studies that followed people that are leaders and innovators in their chosen field, the elite “achievers”.  Intelligence and talent only shows up in a couple of these studies, and never at the top of the list. The leading qualities that the most successful people in the world have are dedication, deliberate practice, self-discipline, perseverance, conscientiousness, and passion.  Blogger Raymond T. Hightower, president of WisdomGroup, summarizes a study in Malcolm Gladwell's book Outliers: “In the early 1990s, a team of psychologists in Berlin, Germany studied violin students. All of the subjects were asked this question: “Over the course of your entire career, ever since you first picked up the violin, how many hours have you practiced?” By age twenty, the elite performers averaged more than 10,000 hours of practice each, while the less able performers had only 4,000 hours of practice.” To quote Thomas Edison: “Genius is 1% inspiration and 99% perspiration.”

In yoga, we call this quality tapas. One of the definitions of tapas is “discipline”. It’s the choice you make every day to get on the mat, to commit again and again and again to your practice.  It's the discipline of saying no to late nights out because you want to get up early and meditate.  It's what gets you on the mat after a long day when a glass of wine and mindless TV is so much easier.  It's the "no excuses" principle. Tapas is also related to heat or fire.  It’s the heat that builds by doing over and over until you get it right, in spite of frustration, roadblocks, challenges. It's the fire that stokes your passion to pursue a single-minded uplifting goal, that gets you back up after falling down again and again.
One fascinating point of the study referenced in Outliers: No “naturally gifted” performers emerged. If natural talent had played a role, we would expect some of the “naturals” to float to the top of the elite level with fewer practice hours than everyone else. But the data showed otherwise. The psychologists found a direct statistical relationship between hours of practice and achievement. No shortcuts. No naturals.

What is natural or innate is the impetus of the desire, the passion for whatever it is you are passionate about which arises from a place deep inside yourself.  Tantric scripture tells us that any thought you have, any desire for greatness flows into you from the One Source of Being.  It's not natural talent that starts us on a particular path, but the will of the Divine to experience life through you as you. Whatever you want to achieve in your life is the same as what the Universe wants for you. Tapas is the burning desire to connect to your highest, it is the heat of transformation. It's the passion in your heart to live to your fullest. Heat facilitates your evolution by burning away your self-limiting patterns and false identities. When these "impurities" are burned away, your authentic radiance shines through.

Last week we talked about the power of the Shakti, how we are innately powerful beings and have the choice to use that power on our own behalf in ways that lift us and those around us up, or otherwise. In the Hindu myths, the demons don’t get rewarded by doing “good” or “evil” – they become powerful because they practice tapas – they are single minded in their focus. Nature rewards success. Danny Arguetty says: “We are free beings living in a stream of potentiality – how we participate in the world, make connections and align our intentionality allows us to harness this power to either build or destroy.”

So that’s the good news and the bad news.  You are immensely powerful. You can partner with the Shakti to create whatever it is you want for yourself.  But you have to do it.  During this challenging week when I have found it particularly easy to feel helpless, remember that your actions matter.  Your tapas can move you in whatever direction you choose as long as you are willing to put the time in, to dedicate yourself fully to what you are passionate about. And when others are using their own power – the same power you have - to move things in a direction you aren’t happy about it’s all the more important to do just that. May the light of awareness shine through all of us, and may our dedicated practice help shift the world around us in the direction we wish to see it move in.
Posted by Rachel Dewan at 7:49 AM